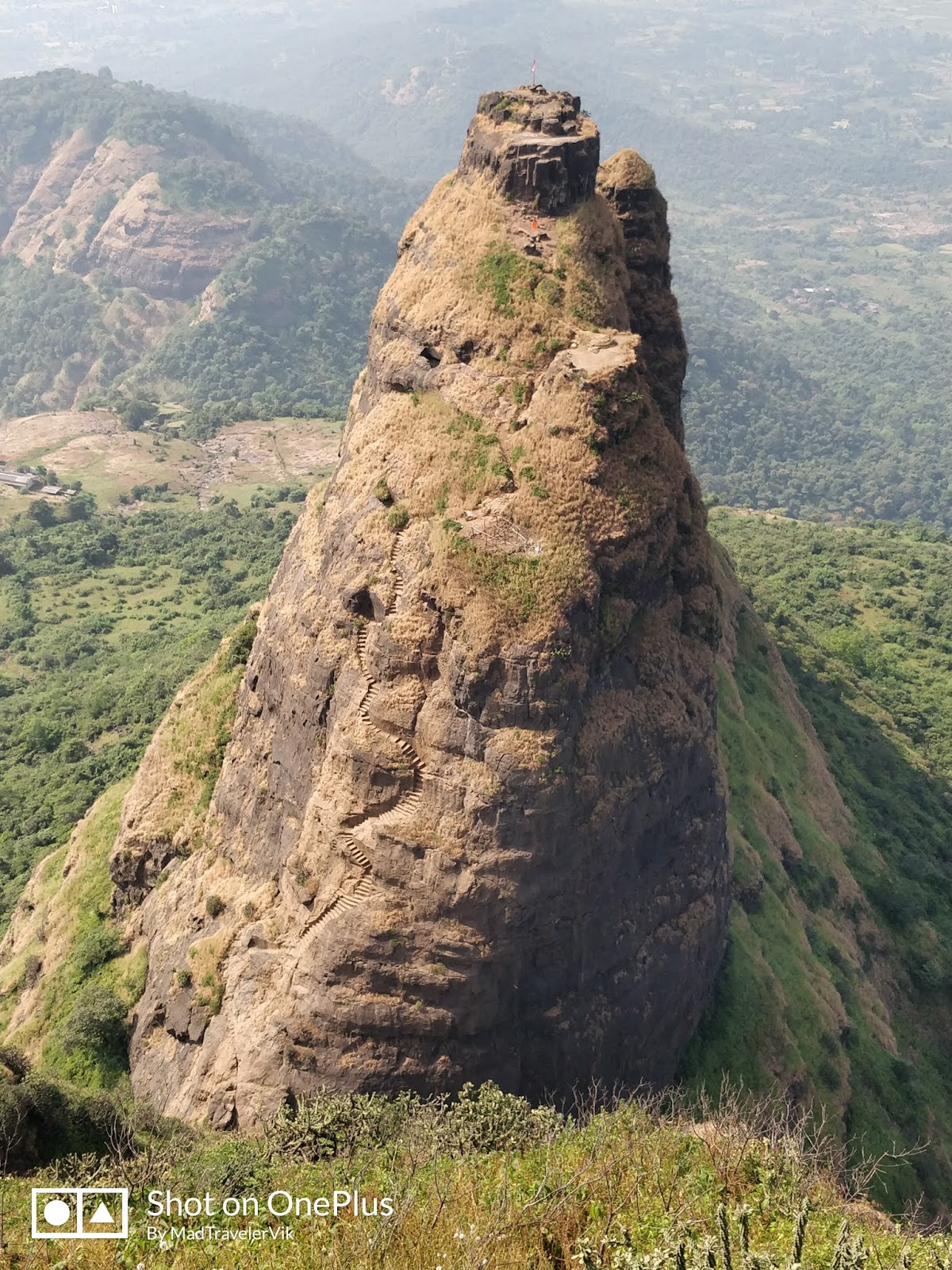 Another faint hearted trek after Dhak Bahiri was Kalavantin Durg. In Marathi language Durg means Fort. This fort lies near Mumbai for its danger-ridden path and has already lost several live; nonetheless, it still looks attractive.

Kalavantin Durg is a 2250 feet high summit located in the Western Ghats, near the Prabalgad fort in the Raigad district of Maharashtra, India. It is also known as Kelve Teen, Kalavantincha Sulka, or Kalavantin Pinnacle. It is one of the popular trekking destination. According to local guides, it was built for queen Kalavantin in the 15th century, around the same time as neighbouring Prabalgad fort.

HOW YOU CAN REACH TO KALAVANTIN DURG

By Air:
Nearest airport is Mumbai and Pune which is further well connected to other major states of India.

BY Road:
Panvel is 140 km from Pune and 80 km from Mumbai. Easy roads available to drive by road and those are very scenic in rainy season. Thakurwadi village is further 14 km from Panvel.

History
Kalavantin Durg’s history is often mixed with that of the nearby Prabalgad Fort. The Prabalgad Fort was built by the Bahmani Sultanate to keep an eye on the Panvel Fort and Kalyan Fort in the North Konkan area. Around 1458 A.D, “Malik Ahmad” the prime minister of the kingdom of Ahmednagar, took over the fort during his conquest of Konkan. After disintegration of the Bahmani Sultanate, the fort remained with the Ahmadnagar Sultanate.
During the collapse of Ahmednagar Sultanate, Shahaji led a helping hand against the separate forces of the Mughal Empire and the Adil Shahi dynasty. After the collapse of Sultanate, he moved to Muranjan along with his wife Jijabai and son Shivaji for a brief period of time. However, following Shahaji’s defeat and the agreement of Mahuli, North Konkan along with the fort, was ceded to Mughals who granted ruling authority of the area to Adilshah of Bijapur. Chhatrapati Shivaji conquered the fort from the Mughals in 1657 A.D, after which established himself in the Kalyan-Bhivandi area. During the attack of Chhatrapati Shivaji, the fort was governed by “Kesar Singh”, a Mughal sardar and was force to put up a strong resistance. Singh dead during the battle in October 1657. Kesar Singh’s mother hid herself and her grandchild during the attack. Chhatrapati Shivaji in act of kindness made sure the lady and the child were allowed a safe passage out.
In the year 1826, Umaji Naik, a freedom fighter and his associates were believed to have made the fort as their home for a brief period of time.

Coming to my experience, so most awaited day had arrived. It was time to give this positive energy a direction. Positive energy to trek to Kalavantin Durg. A trek to top of Kalavantin Durg is considered one of the most challenging ones in the Western Ghats. If anyone traveling through local transport then need to walk further 15 minute to reach base village. There is small home at base village where you can park your vehicle and also foods are served there.  They charge 30 RS for Two wheeler. From there route starts with zigzag. After walk of 15 minute there is one check point where you need to pay 50 RS to pass further for trek. You may witness show of fireflies in night time.  A long hike from base village will take you through a dense forest and treeline for quarter of the way up, then it opens up in to rock. Be very careful here. It is worth the climb up, when you see the expensive view from top. This is the same route that goes to Prabalgad fort, the only thing you have to take right to Prabalgad and left to Kalavantin from Prabalmachi plateau.


There is small temple of Hanuman and Ganesh on route.  The summit is accessible via a 3 km hike from the Thakurwadi village in Karjat taluka. After Prabalmachi village (2km from Thakurwadi), the hike route diverges in to two paths: the shorter one towards kalavantin Durg, and the longer one towards Prabalgad fort. You don’t need confuse here because there are marking available here. The route to Kalavantin is a roughly 60 degree incline, and invlolves rock-cut steps that are as high as 2 feet. After half an hour trek from Prabalmachi village, we reach the col between kalavantin and Prabalgad fort. From here there are rock cut stairs which are quite steep and have bigger height. These rock cut stairs are easy to climb unless one has vertigo or fear of height. Climbing stairs in rainy season is tricky. So, we should take upmost care. After the climbing these giant steps slowly for some time we were almost at the top of pinnacle.

The last part of the trek was still to negotiate, “Rock climbing”. On top there is Orange flag and nothing else. One could see Prabalmachi plateau from the top and Prabalgad standing behind. One can also see Matheran, chanderi, Peb, Irshal and Karnala forts.

If anyone wants to do camping, there is enough space available at plateau where you can pitch own tent and experience camp fire. There is small hotel at this plateau that serves home made food. Kalavantin and Prabalgad is one of those trek which is also famous as night trek and you may find good amount of crowd on weekends.

Descending down from any trek is easy but to pass rock part it was bit hard for us. Somehow we managed to get down from rope and then another 1 an half hour we are down at base village.

THINGS TO REMEMBER WHILE TREKKING TO KALAVANTIN:
Do follow me by mail for further trek itinerary and complete guide.