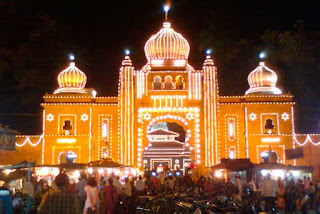 Sangli (City) is a district headquarters of Sangli District in the state of Maharashtra, India. Although it is distinguished for production and trade of turmeric, it is not called turmeric city. Sangli is situated on the banks of river Krishna and is the largest market place for turmeric in Asia and houses many sugar factories. The Ganesha Temple of Sangli is a historical landmark of the city and is visited by thousands of pilgrims.

Sangli district is located in the western part of Maharashtra. It is bounded by Satara and Solapur districts to the north, Bijapur District to the east, Kolhapur and Belgaum districts to the south, and Ratnagiri district to the west. Sangli district is situated in the river basins of the Warna and Krishna rivers. The valley of the River Krishna and its tributaries is one of the greenest areas of the country. Other small rivers, such as the Warana and the Panchganga, flow into the River Krishna. Land in the region is best suitable for agriculture. Sangli city is known as Natyapandhari, the birthplace of Marathi drama. It has a historic Ganpati temple built in the 18th century by ruling Patwardhan dynasty of Sangli, appointed by Peshwas of Pune.

Sangli has one of the largest consumer electronics, clothing, ready-mades, textiles, cosmetics, ladies wear, footwear & casuals market in the region. Famous co-operative departmental stores like Vasant Bazaar, Tarun Bharat bazaar, Aapla bazaar, Bharati Bazaar attract customers from all the nearby cities & towns. Jewelry made in Sangli is one regarded the best. Harbhat road, Maruti road, Tarun bharat stadium & main road are the best shopping areas of the city. New and new shopping plazas and arcades are coming up in Vishrambag & Miraj road, which are considered the posh localities in Sangli

The traditional marathi food served at Bage Ganapati temple on the banks of Krishna river is a main attraction. Spicy puffed rice called as Bhadang is the famous snacks dish of Sangli. You can get this dish all over the city. This crispy dish is served with chopped onions, chilies, lemon & coriander leaves to garnish.

Sangli-Miraj cities have about 13 theatres which screen Hindi, Marathi & English movies. Municipal Corporation has developed 3 modern auditoriums in the cities which host dramas, stage shows, gatherings, musical shows, etc. The city is full of entertainment throughout the year. You can find clubhouses, healthclubs, tennis courts, pool game plazas, and cyber cafes everywhere in the city. Krishna valley club is a well-known club, which has healthclub, swimming pool, conference halls, 5 star suites and other facilities. The first Common wealth international chess championship of the millennium was held at this club. Another swimming pool from Rotary club in the heart of the city is also open to general public.