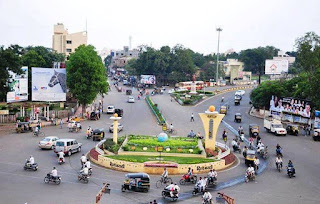 Solapur is a city in south Western Maharashtra, India. It lies on the border of Maharastra & Karnataka. Solapur has Marathi Telugu & kannada population with Marathi as major language and telugu as sub major
It is the fourth largest district in Maharashtra in terms of land area and seventh largest in terms of population.The district shares its the borders with southern Indian state Karnataka.
Solapur is well known for its textile industries often referred as Manchestar of india.Solapur chadars and towels are world famous.It has been a leading centre for cotton mills and power looms, however they have been fast disappearning. solapur had the world’s second largest and asia largest spinning mill

The chief deity of the city is Shri Siddheshwar. The “Nandidhwaj” procession on Makar Sankranti is celebrated on 14 January. An annual fair locally known as ‘Gadda yatra’ attracts large crowd. For more information on Mandir. Solapur District was ruled by various dynasties such as Andhrabhratyas, Chalukyas, Rashtrakutas, Yadavas, Kalachuri and Bahamanis. ‘Solapur’ is believed to be derived from two words ‘Sola’ meaning sixteen and ‘pur’ meaning village. The present city of Solapur was considered to be spread over sixteen villages viz. Aadilpur, Ahmedpur, Chapaldev, Fatehpur, Jamdarwadi, Kalajapur, Khadarpur, Khandervkiwadi, Muhammadpur, Ranapur, Sandalpur, Shaikpur, Solapur, Sonalagi, Sonapur and Vaidakwadi. But this is not justified by any historical researches. However, some historians believe that Solapur existed as single village Sonnalgi and expanded in its recent form.

Solapur Airport is located to the south of Solapur city. Currently its has no scheduled services.

Hotel Surya International:
Surya international hotel in solapur witnesses this growth & warmth of the tourist for the past years due to its hospitality quite & sceneric atmosphere though not far away from the business center of the city