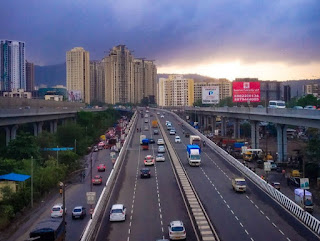 Thane is a city in Maharashtra, India, at the head of the Thane Creek. It is the administrative headquarters of Thane district. On 16 April 1854, the G.I.P. Railway’s first train ever to run in India rolled out from “Boree Bunder” (now the Chhatrapati Shivaji Terminus) to “Thane” (previously pronounced and written as “Thana”), 34 kilometers away. This marked the dawn of the Railway Age in Asia. Thane covers an area of 147 km2 and has a population of more than 1.8 million within its municipal limits, according to the 2011 census.

Thane comes under Mumbai Metropolitan Region and also the proximity with Mumbai has made it culturally a part of it. Thane is also known as the City of Lakes. The city has around 35 lakes. The most beautiful of them is the Masunda Talao, also known as Talao Pali. The lake offers boating and water scooter facilities. The lake is near Gadkari Rangayatan, a drama theatre which is a very popular hub for entertainment in Thane. The Kopineshwar Temple located on the banks of the Masunda Talao is the oldest temple to be found in the entire district of Thane. It was built and renovated centuries back, in about 1750 AD by Chimajji Appa. The Upvan Lake is located at the foot-hills of the Yeoor hills and is a scenic spot. It is flanked by the Yeoor hills on one side and the tall Neelkanth Heights on one side, and is a common spot for recreation.

Rail:
Thane was the terminus for the first ever passenger train in India. On 16 April 1853, the first passenger train service was inaugurated between Chatrapati Shivaji Terminus (CST) and Thane.Covering a distance of 34 kilometres (21 mi), it was hauled by three locomotives – Sahib, Sindh and Sultan.
Thane is well connected with neighbouring suburbs through Central and Trans-Harbour Line Suburban railway network. Thane is a railway juntion for the Thane-Vashi Harbour Line and Central Line.Also, it is a major halting point for many outstation trains moving in and out of Mumbai. It one of the major railway stations of Mumbai Suburban Railway. In fact, it has become the busiest suburban station in Mumbai which handles 6.54 lakh passengers daily.For the smooth flow of such a crowd , escalators have been launched recently in the 3rd and 4th platform. Another escalator is also being constructed on 5th and 6th platform.
There are plans of extending the Ghatkopar-Mulund Metro line upto Thane. So there will be a metro corridor from Wadala to Kasarvadavali on Ghodbunder Road.

Road:
Thane Municipal Transport (TMT), Brihanmumbai Electric Supply and Transport (BEST), Navi Mumbai Municipal Transport (NMMT), State Transport (ST) corporations provide public bus service to the city. Auto rickshaws on meter is available to travel within city along with taxis. The fares of taxis and auto rickshaws are same that of Mumbai.
The public transport on newly developed Ghodbunder road area is not satisfactory at the moment and needs lot of improvement .The newly constructed Station Area Traffic Improvement Scheme (SATIS) has however given good results. The series of flyover bridges are being constructed on the Ghodbunder road to overcome the traffic issues at Kapurbawadi, Patlipada, Waghbil and Manpada junctions of which the 3 flyovers (Patlipada, Waghbil and Manpada)has been opened.There are also plans for introducing L.R.T. and tramways for local transport.The first L.R.T. line will run from Anandnagar(Thane east) to Ovala village on Ghodbandar road.

Showers in the Vicinity

Apart from the above there are a couple of multiplexes in Mulund which are in close proximity to Thane. A new shopping mall viz. Viviana Mall has been opened at Eastern Express Highway, has Cinepolis (14 Screens).
Thane has a botanical garden which was inaugurated in 2011.[11] The garden is a joint initiative of TMC and Forest Department. It is located at Kopri near Bara Bunglow area and is named after late Shiv Sena leader Dattaji Salvi. There are a few other gardens and open spaces for children’s recreation purposes.
For the elite, The Blue Roof Club at Ovala, The Golden Swan Club at Yeoor and United 21 are three full fledged clubs with facilities such as swimming, gymnasium, sports and restaurant facilities. United 21 also has a discotheque, which is the first in Thane.