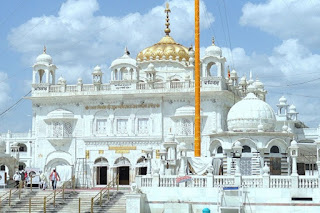 Nanded is the headquarters of Nanded district in the Marathwada Division of Maharashtra. Nanded is a holy place for Hindus because the Renukadevi Shaktipeetha Temple is located there in Mahur. City is situated on the bank of River Godavari which is one of the important rivers in India. Nanded has many Sufi shrines as well.

One of the oldest cities in the Marathwada region of Maharashtra, Nanded is situated on the north bank of the Godavari River. The Nanda dynasty ruled over Nanded for generations in the 5th and 4th centuries BCE. Nanded was also part of the Maurya Empire under Ashoka (c. 272 to 231 BCE).
Early mentions of Nanded are found in the Lilacharitra, a treatise written about 700 years ago by Mhaimbhatta. The city was formerly known as Nanditat according to a copper plate inscription found at Vasim.

Nanded District and the adjoining areas were ruled over by the Andhrabhrtyas and Satvahanas during the first century AD. Nanded was the capital of the district of Telangana under Aurangzeb. In 1708, the year following Aurangzeb’s death, Guru Gobind Singh, the tenth spiritual leader of the Sikhs, came to Nanded. He proclaimed himself the last living Guru and established the Guru Granth Sahib as the eternal Guru of Sikhism, elevating the reverence of the text to that of a living leader. Around 1835, Maharaja Ranjit Singh’s oversaw the construction of a gurudwara at Nanded. Located at the site of Guru Gobind Singh’s cremation, the gurudwara is part of the Hazur Sahib.
Nanded
86°
Partly Cloudy
05:5518:58 IST
Feels like: 97°F
Wind: 6mph WNW
Humidity: 70%
Pressure: 29.74"Hg
UV index: 11
MonTueWed
90/75°F
90/75°F
86/75°F
Weather forecast Nanded, India ▸
Nanded became part of the Hyderabad State in 1725 and continued to be part of the Nizam’s dominions until 1948. After India gained independence in 1947, the Indian Armed Forces annexed Hyderabad and ended the rule of the Nizam in Operation Polo,making Nanded part of the new Hyderabad State. Nanded being Marathi speaking area, is part of Maharashtra based on India’s linguistic state formation.

Popularity of this mall is such that almost all the celebrities who visit Marathwada make it a point to drop in here. It also houses a multiplex with stadium seating, wall-to-wall screens and mind blowing sound; to be functional soon to showcase the latest hollywood & bollywood movies.

Restaurants:
A multi-cuisine restaurants offers an exciting all-day dining venue, with modern interiors and comfortable surroundings to relax and enjoy a good meal.

Nanded Airport, formally known as Shri Guru Gobind Singh Ji Airport, offers daily flights to Mumbai, Nagpur, Trivandrum, and Delhi. The nearest international airport is Hyderabad, 284 kilometres away. Nanded has the distinction of having Marathwada’s first airport. It was renovated in 2008 at a cost of 940 million rupees.

Nanded (NED) is the divisional headquarters of the Nanded Division of the South Central Railway (SCR) zone of Indian Railways. It is one of the most important Railway station in Maharashtra which is connected to major cities in India. Direct trains are available to Nanded from Mumbai, Hyderabad, Delhi, Amritsar, Aurangabad, Pune, Bangalore, Nagpur, Visakhapatnam, Kolkata, Tirupati, Patna, Sambalpur, Rameswaram, Ajmer, Sri Ganganagar and Patna.

Nanded is 651 kilometres southeast of Mumbai by road. It is on National Highway 222, about a five-hour drive from Aurangabad and an eleven-hour drive from Pune. Several passenger bus services operate from Nanded providing overnight service to most major cities in Maharashtra.